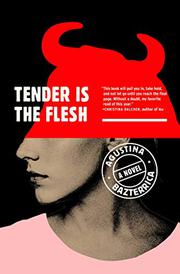 TENDER IS THE FLESH

A processing plant manager struggles with the grim realities of a society where cannibalism is the new normal.

Marcos Tejo is the boss’s son. Once, that meant taking over his father’s meat plant when the older man began to suffer from dementia and require nursing home care. But ever since the Transition, when animals became infected with a virus fatal to humans and had to be destroyed, society has been clamoring for a new source of meat, laboring under the belief, reinforced by media and government messaging, that plant proteins would result in malnutrition and ill effects. Now, as is true across the country, Marcos’ slaughterhouse deals in “special meat”—human beings. Though Marcos understands the moral horror of his job supervising the workers who stun, kill, flay, and butcher other humans, he doesn’t feel much since the crib death of his infant son. “One can get used to almost anything,” he muses, “except for the death of a child.” One day, the head of a breeding center sends Marcos a gift: an adult female FGP, a “First Generation Pure,” born and bred in captivity. As Marcos lives with his product, he gradually begins to awaken to the trauma of his past and the nightmare of his present. This is Bazterrica’s first novel to appear in America, though she is widely published in her native Argentina, and it could have been inelegant, using shock value to get across ideas about the inherent brutality of factory farming and the cruelty of governments and societies willing to sacrifice their citizenry for power and money. It is a testament to Bazterrica’s skill that such a bleak book can also be a page-turner.

An unrelentingly dark and disquieting look at the way societies conform to committing atrocities.