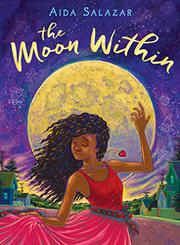 A worthy successor to Are You There God? It’s Me, Margaret set in present-day Oakland.

Eleven-year-old Celi, mixed black–Puerto Rican–Mexican, dreads the imminent arrival of her period, less because of the menstruation itself and more because her mother insists that Celi have a “moon ceremony,” in which the members of her mother’s “women’s circle” will mark the transition from childhood to womanhood. Meanwhile, her best friend is going through a different transition—from girl to xochihuah, “neither / female nor male but both.” While Celi is initially shocked by the adjustment, she loves Mar, as her best friend now prefers to be known, no less. But when other kids, including her crush, Iván, say cruel things about Mar, Celi is torn between the possibility of a first kiss and loyalty to her friend. Salazar’s verse novel is sensitive and fresh, featuring modern interpretations of pre-Columbian coming-of-age traditions that arise organically from the characters. Mar’s heritage is Mexican, and Iván is mixed, black and Mexican; Celi and Mar’s participation in a Puerto Rican performance group and their mothers’ shared, deeply felt Xicana identity allow Salazar to naturally explore cultural nuances not often seen in middle-grade fiction. Genderfluid Mar takes both that name and the masculine pronoun midway through the book, and Celi’s narration adjusts accordingly even if some of their peers’ attitudes do not.