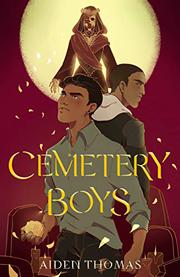 A gay, transgender brujo with burgeoning powers seeks answers about his cousin’s death.

Sixteen-year-old Yadriel also wishes for acknowledgement from his community but unexpectedly finds himself entangled in the unresolved wishes of a strong-willed, good-looking spirit. He descends from a long line of brujx who have been granted magic power by Lady Death to heal the living and to guide spirits into the afterlife. Although he’s grown up surrounded by a close-knit community, Yadriel feels alone, excluded indefinitely from a sacred rite of passage because he is transgender. When he senses that his cousin Miguel has died suddenly but the family can’t locate him, Yadriel sees an opportunity to prove to everyone he’s a true brujo by solving the mystery and releasing his cousin’s lost spirit. His plan quickly falls apart, as he accidentally summons the spirit of Julian Diaz, a boy with unfinished business who died the same day as Miguel. Both the romance and mystery burn slow and hot until the climax. Stakes begin high, and the intensity only increases with a looming deadline and a constant risk that Julian might lose himself, turning maligno. The cast of characters represents a diversity of Latinx identities sharing a community in East Los Angeles. Julian is Colombian while Yadriel is Cuban and Mexican. Their romance provides joyful, ground-breaking representation for gay, transgender boys.