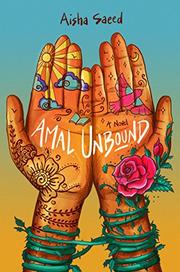 A Pakistani girl’s dreams of an education dissolve when she is forced into indentured servitude.

Bookish Amal, who lives in a small village in Punjab, Pakistan, dreams of becoming a teacher and a poet. When she inadvertently insults Jawad, the son of her village’s wealthy and influential, but corrupt, landlord, Khan Sahib, she is forced into indentured servitude with his family. Jawad assures Amal’s father that she will be “treated like all my servants, no better, no worse” and promises him that he will “let her visit twice a year like the others.” Once in her enslaver’s home, Amal is subject to Jawad’s taunts, which are somewhat mitigated by the kind words of his mother, Nasreen Baji, whose servant she becomes. Amal keeps her spirits up by reading poetry books that she surreptitiously sneaks from the estate library and teaching the other servant girls how to read and write. Amal ultimately finds a friend in the village’s literacy center—funded, ironically enough, by the Khan family—where she befriends the U.S.–educated teacher, Asif, and learns that the powerful aren’t invincible. Amal narrates, her passion for learning, love for her family, and despair at her circumstance evoked with sympathy and clarity, as is the setting.

Inspired by Malala Yousafzai and countless unknown girls like her, Saeed’s timely and stirring middle-grade debut is a celebration of resistance and justice.