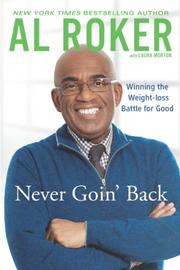 Winning the Weight-Loss Battle for Good

The author seems like a genial man, a devoted father and the possessor of an exciting career that has provided him with plenty of stories to tell. His tale of triumph over a serious weight problem that plagued him since childhood might provide inspiration, or at least comfort, to the millions of Americans who continue to struggle with their own weight. However, the writing is lazy and, at times, downright cringe-worthy; most readers would probably rather not know as much as Roker wishes to share about his sex life, his bowel movements or the size of his penis. Clearly, the author intends to come across as funny and relatable, but too much forced folksiness renders even his best anecdotes flat. His desire to be universally appealing leaches his story of specificity and vitality; he mentions his race a couple of times, but in general, he is so desperate to play the role of an Everyman that he conveys little sense of who he is as a person, beyond the fact that he “loves life, [his] family and good music.” Roker, who wasn't born rich, is now a wealthy man, and many of his well-meant suggestions betray the cluelessness that often results from becoming accustomed to having money. Among other things, Roker advises those who undergo gastric bypass surgery, as he did, to hire a home health care aide for the first two weeks after the operation. Given that such care is unaffordable for millions, this is a “great tip” of limited value.

Worth skimming only if you are struggling to lose weight and considering gastric bypass surgery.