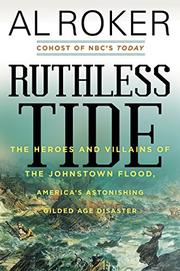 The Tragic Epic of the Johnstown Flood

The ebullient weather personality from NBC’s Today show returns with a flood account that is both intimate and alert to the wealth and class distinctions highlighted by the 1889 Johnstown Flood.

Roker, who wrote about a 1900 hurricane (The Storm of the Century, 2015, etc.), has some sizable footsteps to follow in this one—David McCullough’s 1968 The Johnstown Flood—but he fills them nicely in this fresh account of the Pennsylvania dam break that destroyed Johnstown and killed more than 2,000 people. Roker is especially adept at focusing on key individuals—residents, politicians, movers and shakers, rescue workers—and letting their stories represent the myriads of others. One harrowing tale involves the improbable rescue of a little girl in the swirling torrent that struck the town during a heavy rain when a dam, 14 miles away (and above the town), broke and sent millions of tons of water surging down into Johnstown and some small communities that lay in the torrent’s path. The author is also very alert to the class issues that underlay it all. The earthen dam formed a lake for some very wealthy citizens (among them, Andrew Carnegie), who, of course, denied responsibility afterward. Roker notes that only 35 of the 60 members of this wealthy-person’s club contributed to the relief fund. The author also goes into detail—sometimes too much—about some of the individuals involved: Carnegie, Clara Barton (whose Red Cross would swell in public awareness afterward), and numerous others. He points out some inconsistencies in American thought, as well—about how, for instance, we are quick to help people suffering in a natural disaster but not suffering from everyday poverty and disease. He also discusses some of the nasty anti-immigrant feelings that emerged during the cleanup.