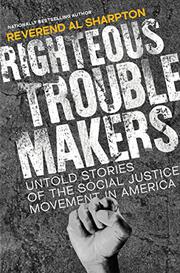 Untold Stories of the Social Justice Movement in America

The prominent Baptist preacher and activist spotlights the work of the “unsung heroes” of modern social justice movements.

For Sharpton, the 2020 George Floyd murder protests recalled the civil rights marches of the 1960s. While the former event made clear that the “hardships and victories” of all marginalized groups had merged into a single fight, both events were alike in how the bravery of everyday people had been “overlooked or cast aside.” In this apt follow-up to last year’s Rise Up: Confronting a Country at the Crossroads, the author begins with story of Darnella Frazier, who recorded Floyd’s murder on her cellphone to honor truth and all Black men who live in fear of White supremacy. In his discussion of other police brutality victims, Sharpton recalls another police chokehold victim, Eric Garner, as well as his mother, Gwen Carr. In the years after her son’s death, Carr joined forces with other similarly bereaved mothers to form Mothers of the Movement, an organization dedicated to “raising social awareness of police violence.” Yet as Sharpton emphasizes throughout, the larger movement of which all these individuals are part was built on the efforts of early civil rights activists like James Meredith, the first Black man to graduate from the rabidly segregationist University of Mississippi, and Claudette Colvin, the poor Black girl whose 1955 arrest for refusing to sit at the back of an Alabama bus inspired the more “mediagenic” Rosa Parks to action. Sharpton also pays extended homage to Pauli Murray, a queer mid-20th-century lawyer and feminist. Co-founder of the National Organization for Women with Betty Friedan and others, her legal scholarship informed the work of such judicial luminaries as Thurgood Marshall and Ruth Bader Ginsburg. Seeking to rectify omissions of history, Sharpton delivers a fierce and celebratory book that offers insight into ways everyone can transform the pain of injustice into the “righteous troublemak[ing]” that uplifts all.