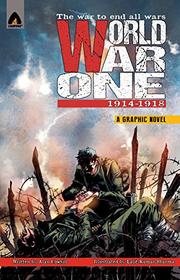 From the Campfire History series

Graphic in both senses, a history of the War to End All Wars with a fictional overlay.

The narrative uses the experiences of British Tommy George Smith in the trenches to put a human face on the broader pictures of events in various theaters of the war. It opens with the almost-accidental assassination of Archduke Franz Ferdinand, then goes on to tally land and sea battles, the exploits of T.E. Lawrence (of Arabia) and other iconic figures. It covers technological advances, from poison gas to tanks, and distinctive events like the Christmas Truce. George’s bitter judgments of “the generals” who ordered millions of “[y]oung lives thrown away for no real reason” accompany scene after scene of sodden, muddy misery, bullets blasting into soldiers’ bodies and fields strewn with corpses. The war behind the lines and at home is rarely seen, and though other participants occasionally step in for a few panels, the point of view is so Anglocentric that the German and even Russian sides merit barely a glance. Most of the casualty figures and other statistics are buried in the text, and though backmatter includes notes on a Croix de Guerre–winning homing pigeon and other animal “heroes,” there is no index or bibliography.

Brutally explicit visuals add immediacy to a serviceable but not exceptional historical overview.