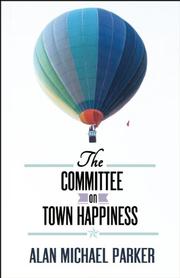 THE COMMITTEE ON TOWN HAPPINESS

Parker zings—but oh so gently—small-town politics and the pretentious politicians who regulate our lives at the micro-level.

The Committee on Town Happiness is happy indeed to make our happy lives even happier, and to this end its members vote on a constant stream of issues reflecting their concerns. This slim novel contains almost 100 chapters, and in about two-thirds of them a vote is taken on something or other. For example, the committee passes by acclamation a testimonial that “trees demonstrate steadiness of purpose and evenness of demeanor.” When things start to heat up on a controversial topic, the committee votes 5-3 “to destroy the minutes upon adjourning” (though one wag of a committeeman wonders whether "the minutes say destroy the minutes"). The primary goal of the committee is right in its name, but the members run into an obvious dilemma: How does one quantify and measure happiness? They do their best by passing legislation meant to materially increase the well-being of the community as a whole. Such ordinances include the regulation of writing on biking jerseys: “No vulgarities may be printed in sans serif fonts on jerseys; no vulgarities may be written backwards, to be read in rear view mirrors.” When citizens start disappearing, there's concern (and the launching of hot air balloons to find them), and occasionally some slight chicanery interrupts the committee's good intentions, but the plot remains minimal.

Parker’s not trying to be Dostoevsky here but rather wishes to create light and good-natured entertainment—and he succeeds.