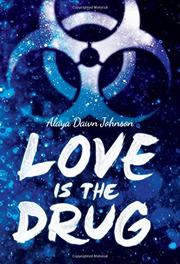 LOVE IS THE DRUG

Lost memories, a deadly pandemic flu and the children of D.C.’s elite come together in this sophisticated bio-thriller.

When Emily Bird wakes up in the hospital, the last thing she remembers is attending a party at a senator’s home eight days earlier. She’s told she had an accident after taking some bad designer drugs, but a threatening visit from a national security contractor whom Bird met at the party suggests the truth isn’t so simple. Meanwhile, the entire Beltway is under an oppressive and all-too-believable quarantine and curfew thanks to a virulent new strain of flu. Bird’s parents, two prominent black scientists, want her to avoid trouble after her misadventure, but she can’t resist investigating. She finds an unlikely ally in Coffee, a diplomat’s son who uses drugs and deals them to others but who also sees strength in Bird that she struggles to see in herself. Johnson, who astounded with her cyberpunk teen debut, The Summer Prince (2013), immerses readers in the complexities of Bird’s world, especially her fraught relationship with her parents and the intersections of race and class at her elite prep school. The often lyrical third-person, present-tense narration, the compelling romance and the richly developed cast of characters elevate this novel far above more formulaic suspense fare.