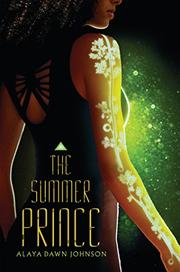 An art project, a rebellion and a sacrifice make up this nuanced, original cyberpunk adventure.

June, 17, remembers the last sacrifice of the Summer King, nine years before. In a future Brazil, after climate change, wars, natural disasters and plague have devastated the world, Palmares Três is a peaceful and just city, technologically supported with holos, nanohooks and bots. Beneath the city's glittering facade, however, there's another reality. Youth is stifled while the governing Aunties keep Palmares Três static in a class-stratified society centuries behind the rest of the developed world. June and best friend Gil, both relatively privileged artists, happily spend their spring dancing, creating public art and voting for the newest Summer King to be sacrificed for the city's prosperity after a year. When gorgeous, dark-skinned Enki is elected, both June and Gil fall for him—but it's Gil he takes as a lover, and June he takes as an artistic collaborator. Their love triangle, in a city with no gender-based limitations on romantic or sexual partnerships, is multifaceted, not the usual heroine-chooses-between-two-boys dynamic. As the trio dances—often literally—around one another, June must negotiate between the extremes of stasis and post-humanism, learn to see beyond herself, discover the meaning of integrity, and maybe even save her rotten-at-the-core and best-beloved city.