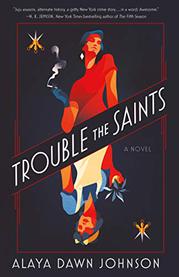 The fates of three people intertwine in a World War II–era New York where some people of color are blessed and cursed with magic in their hands.

Phyllis, a light-skinned African American woman who can “pass” under many circumstances, has impossibly dexterous hands that wield murderous knives in the service of Victor, a Russian mob boss, and believes her kills serve justice. Her once and future lover, Dev, a half-Indian undercover cop posing as Victor’s bartender, whose own hands can sense threats to himself and others, can’t quite reconcile his feelings for Phyllis with his duty to a department that will never truly accept him as one of them. And Phyllis’ best friend, Tamara, an African American snake dancer and aspiring impresario at Victor’s club, with an oracular gift of reading cards, hopes that if she pretends she doesn’t notice the violent foundation of Victor’s empire, it won’t touch her. But the truths that each refuses to acknowledge and the death-haunted pasts that refuse to stay buried have dangerous implications for all three of them, both on the streets of New York City and in the supposedly quiet Hudson Valley town where Dev, Phyllis, and Tamara take an uncertain refuge. Johnson’s secret history is a nuanced portrait of racism in all of its poisonous flavors, brutally overt and unsuccessfully covert. She explores in deeper detail an issue she touched upon in her two YA novels, The Summer Prince (2013) and Love Is the Drug (2014): the incredibly fraught, liminal space of being a light-skinned person of color. In musical prose, she also offers passionate and painful depictions of the love expressed in romance and friendship and the sacrifices such love can demand.

A sad, lovely, and blood-soaked song of a book.