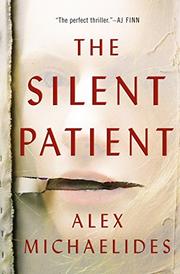 A woman accused of shooting her husband six times in the face refuses to speak.

"Alicia Berenson was thirty-three years old when she killed her husband. They had been married for seven years. They were both artists—Alicia was a painter, and Gabriel was a well-known fashion photographer." Michaelides' debut is narrated in the voice of psychotherapist Theo Faber, who applies for a job at the institution where Alicia is incarcerated because he's fascinated with her case and believes he will be able to get her to talk. The narration of the increasingly unrealistic events that follow is interwoven with excerpts from Alicia's diary. Ah, yes, the old interwoven diary trick. When you read Alicia's diary you'll conclude the woman could well have been a novelist instead of a painter because it contains page after page of detailed dialogue, scenes, and conversations quite unlike those in any journal you've ever seen. " 'What's the matter?' 'I can't talk about it on the phone, I need to see you.' 'It's just—I'm not sure I can make it up to Cambridge at the minute.' 'I'll come to you. This afternoon. Okay?' Something in Paul's voice made me agree without thinking about it. He sounded desperate. 'Okay. Are you sure you can't tell me about it now?' 'I'll see you later.' Paul hung up." Wouldn't all this appear in a diary as "Paul wouldn't tell me what was wrong"? An even more improbable entry is the one that pins the tail on the killer. While much of the book is clumsy, contrived, and silly, it is while reading passages of the diary that one may actually find oneself laughing out loud.

Amateurish, with a twist savvy readers will see coming from a mile away.