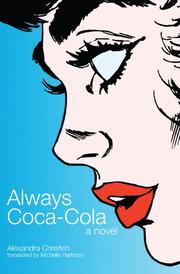 The title refers to an advertising slogan, one that appears on a billboard in Beirut, for the ubiquitous soft drink.

Before narrator Abeer Ward (Arabic for “Fragrant Rose”) was born, her mother had a craving for only one thing—Coca-Cola. Ironically, 20-some years later Abeer’s good friend Yana, a sexually liberated woman and model in Beirut, becomes the visible emblem of the soft drink on a billboard that Abeer can see from her room. (It doesn’t hurt that Yana’s boyfriend is the manager of the local Coca-Cola company.) Yana is Romanian rather than Lebanese, but she’s established herself comfortably in Beirut…at least till she finds out she’s pregnant, and by her boyfriend rather than by her ex-husband. Although she wants to keep the baby, the boyfriend gives her a choice—get rid of the baby and continue to see him, or keep the baby and lose the relationship. Yana and Abeer have a third friend, Yasmine, who makes her own statement by boxing and working out in the local men’s gym. This slim novel, expanded from a short story, follows their day-to-day dealings with the crisis involving Yana, a crisis exacerbated when her boyfriend rapes Abeer. Worried that she’s pregnant, Abeer has to deal with some of the realities of modern life—like getting a pregnancy test from a local pharmacy without becoming branded, shamed or ostracized. Chreiteh keeps up a lively dialogue (trialogue?) among the main characters, and eventually they all learn what it means to be 20-somethings in modern Beirut. Chreiteh is a fresh voice in the Arab world, though either she or translator Hartman is overly addicted to exclamation points that give far too many sentences an inflated and artificial oomph.