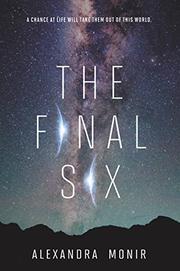 From the Final Six series, volume 1

After losing his family to “the greatest flood Rome has ever known,” skilled white Italian swimmer Leo Danieli would never have expected that in his darkest moment he would be drafted by the European Space Agency to attend the International Space Training Camp, where teens will train to terraform and colonize Jupiter’s moon Europa for human settlement. California native Naomi Ardalan, a second-generation Iranian-American, has also been chosen for her expertise in science and technology. During a period of violent climate change worldwide, Earth’s governments are desperate to draft teens for a space mission for which they have only a few weeks in which to prepare. Twenty-four teen finalists, many orphaned by cataclysmic natural disasters, have been chosen from all over the world to compete for this space colonization mission. Warnings come to Leo and Naomi that there is a more sinister aspect to this mission, especially after things go tragically awry with other candidates during the training. The relationship that develops between Naomi and Leo feels forced, as if their meeting necessitates speedy deployment of a romantic cliché. The use of predictable plot devices, along with the fundamentally ludicrous premise, undermines any believability that would make a reader invest in such an elaborate space journey.

The shelves are already crowded with teens-training-for-space stories; there’s no need to make room for this one.