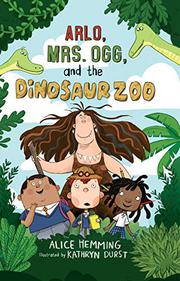 From the Class X series, volume 1

The students of class 4X have a reputation for being rowdy and unteachable—hence their nickname, class X—but maybe their newest sub has just the grit they need.

When 4X drives yet another teacher away with their antics, Mrs. Ogg is sent in to teach this difficult class. Mrs. Ogg isn’t like other teachers 4X has met—her guttural, monosyllabic way of communicating and her fur and bone outfits make the parents and students wonder where she came from. With the end-of-the-year party on the line, the 4X crew have just one more chance to prove that they can stay out of trouble, during a field trip to the zoo. It’s quickly revealed that this is not a typical zoo visit, however, when the class encounters prehistoric creatures! Class statistics, dinosaur facts, and cute illustrations are sprinkled into the text in the form of excerpts from Arlo’s meticulously kept notebook. There are no sources cited for the dinosaur trivia in the book, which may leave readers wondering about the information and where they can learn more. The students and other characters are described and drawn with a wide range of skin tones, from light pink to dark brown, and they also include a student who is learning English and a student who is largely nonverbal. Protagonist Arlo is white and has a stutter. Troublingly, the two black students in the book are described in stereotypical ways.

A typical tough-class story is enlivened with dinosaurs but marred by stereotypes and missing information.