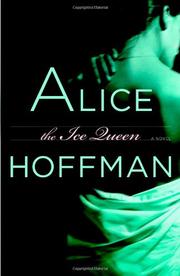 The veteran, bestselling author (Blackbird House, 2004, etc.) takes risks—most of which pay off—in her dark tale of a woman literally struck by lightning.

The unnamed narrator has been racked by guilt since she was eight, when she petulantly wished that her mother would disappear. Mom died in a car accident that very night, and the traumatized girl grows up into a quiet librarian with a violent interior life. Her preferred reading is the grimmest sort of fairy tale; she makes up one of her own about a girl who turns into ice so that “nothing could hurt her anymore.” At the reference desk she specializes in information on ways to die, an expertise that leads her into a joyless sexual liaison with the local police chief. After the grandmother who raised them dies, the narrator’s brother takes his severely depressed sister to Orlon, Fla., where he’s a professor of meteorology. Peeved by his enthusiasm for the stormy weather en route, she wishes to be struck by lightning, and . . . you guessed it. The setup is schematic, and the gloomy narrator can be wearying, even when she embarks on a torrid affair with another lightning-strike survivor: Lazarus Jones, who’s still so hot to the touch that they must have sex in water so he doesn’t scorch her. But slowly, just as you’re thinking you’ll scream if you read another fairy-tale metaphor or gruesome description of the damage sustained by lightning victims, the narrator begins to be drawn out of her self-absorbed misery. Her brother and his wife are in desperate straits, Lazarus is not what he seems, and the shock of these discoveries jolts her into recognition that she cares for other people more than she’s admitted. Despite what happened to her mother (which also proves to be not quite what it seemed), love is as necessary as breathing. And love “changed your whole world. Even when you didn’t want it to.” It takes a while to get to the beautiful closing pages, which give the narrator a happy ending she’s more than earned, but this thickly textured, heavily metaphorical approach finally leads us to some genuine human emotion.

Far from perfect, but Hoffman’s more adventurous fans will appreciate this interesting effort.