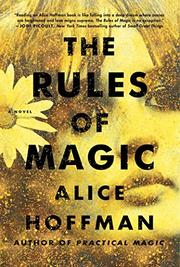 THE RULES OF MAGIC

The Owens sisters are back—not in their previous guise as elderly aunties casting spells in Hoffman’s occult romance Practical Magic (1995), but as fledgling witches in the New York City captured in Patti Smith's memoir Just Kids.

In that magical, mystical milieu, Franny and Bridget are joined by a new character: their foxy younger brother, Vincent, whose “unearthly” charm sends grown women in search of love potions. Heading into the summer of 1960, the three Owens siblings are ever more conscious of their family's quirkiness—and not just the incidents of levitation and gift for reading each other's thoughts while traipsing home to their parents' funky Manhattan town house. The instant Franny turns 17, they are all shipped off to spend the summer with their mother's aunt in Massachusetts. Isabelle Owens might enlist them for esoteric projects like making black soap or picking herbs to cure a neighbor's jealousy, but she at least offers respite from their fretful mother's strict rules against going shoeless, bringing home stray birds, wandering into Greenwich Village, or falling in love. In short order, the siblings meet a know-it-all Boston cousin, April, who brings them up to speed on the curse set in motion by their Salem-witch ancestor, Maria Owens. It spells certain death for males who attempt to woo an Owens woman. Naturally this knowledge does not deter the current generation from circumventing the rule—Bridget most passionately, Franny most rationally, and Vincent most recklessly (believing his gender may protect him). In time, the sisters ignore their mother's plea and move to Greenwich Village, setting up an apothecary, while their rock-star brother, who glimpsed his future in Isabelle’s nifty three-way mirror, breaks hearts like there's no tomorrow. No one's more confident or entertaining than Hoffman at putting across characters willing to tempt fate for true love.

Real events like the Vietnam draft and Stonewall uprising enter the characters' family history as well as a stunning plot twist—delivering everything fans of a much-loved book could hope for in a prequel.