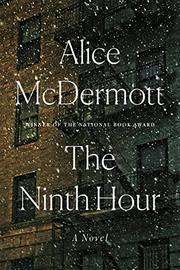 In Brooklyn in the early 20th century, The Little Nursing Sisters of the Sick Poor are intimately involved in the lives of their community.

When a depressed young man with a pregnant wife turns on the gas in his apartment and takes his own life, among the first to arrive on the scene is an elderly nun. “It was Sister St. Savior’s vocation to enter the homes of strangers, mostly the sick and the elderly, to breeze into their apartments and to sail comfortably through their rooms, to open their linen closets or china cabinets or bureau drawers—to peer into their toilets or the soiled handkerchiefs clutched in their hands.” By the time the fatherless baby is born, St. Savior will have been so instrumental in the fate of the young widow that the baby will be her namesake, called Sally for short. Sally will be largely raised in the convent, where her mother has been given a job helping out with laundry. The nuns also find a friend for the new mother—a neighbor with a houseful of babies—then they finagle a baby carriage, and “the two young mothers negotiated the crowded streets like impatient empresses.” This desperately needed and highly successful friendship is just the beginning of the benign interference of the Sisters in the private lives and fates of their civilian neighbors. Partly told by a voice from the future who drops tantalizing hints about what’s to come—for example, a marriage between the occupants of the baby carriages—this novel reveals its ideas about love and morality through the history of three generations, finding them in their kitchens, sickbeds, train compartments, love nests, and basement laundry rooms.

Everything that her readers, the National Book Award committee, and the Pulitzer Prize judges love about McDermott’s (Someone, 2013, etc.) stories of Irish-Catholic American life is back in her eighth novel.