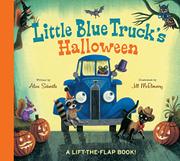 A lift-the-flap book gives the littlest trick-or-treaters some practice identifying partygoers under their costumes.

Little Blue Truck and his buddy Toad are off to a party, and they invite readers (and a black cat) along for the ride: “ ‘Beep! Beep! Beep!’ / says Little Blue. / ‘It’s Halloween!’ / You come, too.” As they drive, they are surprised (and joined) by many of their friends in costume. “Who’s that in a tutu / striking a pose / up on the tiniest / tips of her toes? / Under the mask / who do you see?” Lifting the flap unmasks a friend: “ ‘Quack!’ says the duck. / ‘It’s me! It’s me!’ ” The sheep is disguised as a clown, the cow’s a queen, the pig’s a witch, the hen and her chick are pirates, and the horse is a dragon. Not to be left out, Little Blue has a costume, too. The flaps are large and sturdy, and enough of the animals’ characteristic features are visible under and around the costumes that little ones will be able to make successful guesses even on the first reading. Lovely curvy shapes and autumn colors fade to dusky blues as night falls, and children are sure to notice the traditional elements of a Halloween party: apple bobbing, lit jack-o’-lanterns, and punch and treats.

Beloved Little Blue takes a bit of the mystery—and fear—out of Halloween costumes.