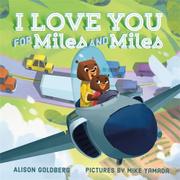 I LOVE YOU FOR MILES AND MILES

A parent bear expresses their love for their cub through comparisons that will appeal to kids who love vehicles of all sorts.

Among other things, the parent’s love is “longer than the longest train…stronger than the strongest excavator…and higher than the highest plane.” In the seemingly digital illustrations, their roles vary, but whether they are cooperating or working side by side, giving direction, or coming to the rescue, their loving smiles light their faces (though their expressions are rather static nevertheless). “My love for you is / Faster than the fastest fire truck / Hurrying faster, faster, / Rushing to you, anywhere you are.” The illustration shows the cub dangling from a tree branch, the parent driving a giant ladder truck that is speeding so fast that none of its tires touch the ground even though it’s but mere feet from the tree. The title page shows the cub with a book under its arm, while the ending spread shows the parent sitting on the edge of the bed, clearly having read the little bear to sleep. While the vehicles will appeal, many of the spreads are quite dark and will be difficult to see in group settings. The adult bear appears to be wearing a bright pink skirt in three pictures, but many readers will miss this detail, especially since the bear lacks the eyelashes that stereotypically signal a female. The child’s gender is ambiguous.