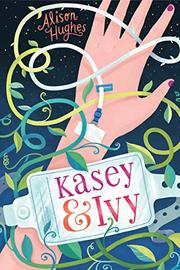 Kasey Morgan is 12 and has received the worst possible news.

She has found out that she has a bacterial infection in her bones and will have to stay in the hospital for an entire month over, wait for it, summer vacation! On top of that, she is the only child staying in the geriatric ward, which is full of scary old people, and she’s permanently attached to her IV unit, which she dubs Ivy, “which is prettier and friendlier.” Slowly, Kasey’s perspective on her fellow patients changes as she becomes accustomed to their quirks and even befriends 94-year-old Missy Wong, the unit’s oldest patient. The book is written in the form of letters to her friend in the outside world, Nina. Kasey’s observational humor and snarky attitude will have readers chuckling. Hughes (Hit the Ground Running, 2017, etc.) reveals in her acknowledgments that she spent a month in a hospital as a child, and she translates that effortlessly for readers, communicating Kasey’s fear and vulnerability as well as that sense that she must put on a brave front for the sake of the adults around her. While only Kasey really comes to life in three dimensions, and the possibly Chinese Missy Wong is the only nonwhite character, the book nevertheless effectively explains geriatric illness for an audience that has probably never considered it, and the glimpses of the lives of older people that generate empathy in Kasey may do so for readers as well.

A surprisingly funny look at a subject readers may think is anything but.