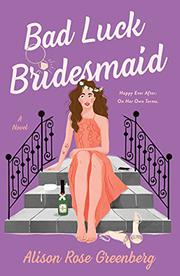 After repeatedly serving as a bridesmaid in weddings that don't end up happening, a woman starts to worry she’s cursed.

Zoey Marks doesn’t believe in marriage, because she’s not sure it ever works out. At least, it doesn’t seem to work out when she’s involved. After being a bridesmaid for two brides who never made it down the aisle, she couldn’t be less interested in getting engaged herself. Especially not when she has her high-powered job running a nontraditional advertising agency with her friend Sara (one of the brides whose weddings Zoey may have cursed). But then she meets Rylan, her lifelong best friend Hannah’s cousin. Zoey quickly falls passionately in love with Rylan, enough to make her possibly think about questioning her anti-marriage stance. That is, until she’s in yet another wedding that ends before it begins. When Rylan proposes right after Zoey gets back home from the third wedding that wasn’t, Zoey turns him down, unable to promise a forever she can’t truly believe in. Wallowing in heartbreak, Zoey’s one comfort is that at least she won’t have to see Rylan again…that is, until Hannah announces that she’s getting married in Ireland, and she wants Zoey by her side. Rylan will be there, and now Zoey has to juggle seeing him, making sure Hannah’s wedding survives Zoey’s bridesmaid curse, and trying to figure out if she can commit to forever and the future she so desperately wants with Rylan. But the wedding weekend is full of secrets, betrayals, and a scheming best man, and Zoey’s afraid that both she and Hannah might not be headed for a happily-ever-after. Zoey’s narration is quick, clever, and full of zingers, but Greenberg often uses that narration to tell the reader things about Zoey’s relationship with Rylan rather than showing their love develop, which makes it difficult to become invested in them as a couple. The story is much more surprising and boldly messy than the cute cover implies, and readers who aren’t looking for a traditional romantic-comedy structure may relate to Zoey’s quest for happiness and her understanding that it can be found in places other than wedding ceremonies.