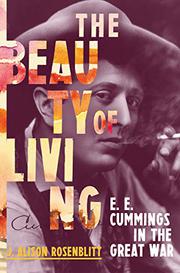 THE BEAUTY OF LIVING

E.E. Cummings in the Great War

How outrage over brutality and violence informed a well-known poet's work.

British literary scholar Rosenblitt creates a perceptive, captivating portrait of the modernist Edward Estlin Cummings (1894-1962), focusing on his early years and experience during World War I. Cummings, she argues persuasively, “remained a war poet until the end of his life. His sympathy with the smallest of creatures, and the beauty that he saw in the world, come out of the destruction that he saw during the war.” Cummings grew up in Massachusetts; his father, minister of Boston’s progressive South Congregational Church, was socially liberal but, within his family, “deeply authoritarian,” generating in his son a “suppressed rage and sense of failure” that led, increasingly, to personal and literary rebellion. At Harvard, cummings was drawn to “Decadence, classicism, Futurism, and poetry.” When war broke out, he volunteered as an ambulance driver in France, a decision that felt willful yet still one that his father would approve. “It was defiance without actual defiance,” Rosenblitt observes. Once in Paris, logistical problems left him and his friend William Brown at large for a month while they waited to be processed. During that time, he fell in love with Marie Louise Lallemand, a prostitute, which Rosenblitt characterizes as a deeply profound relationship. Cummings “clung to his love” for her “because to him she embodied everything about beauty and tragic nobility that would seem to give some romanticized meaning to war and death.” Shortly after beginning their service as ambulance drivers, on the basis of ill-considered letters, cummings and Brown were arrested for being German sympathizers. Through his father’s vociferous efforts, cummings was released after 3 months of imprisonment, an experience he chronicled in visceral detail in The Enormous Room. Besides insightful analyses of cummings’ poetry, Rosenblitt presents him as an accomplished artist, with 74 pieces at the Metropolitan Museum of Art.

A graceful, sympathetic biography of an innovative American poet.