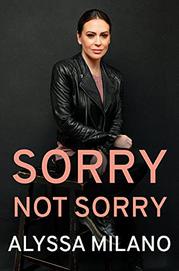 Essays on current political topics by a high-profile actor and activist.

Milano explains in an introduction that she began writing this uneven collection while dealing with a severe case of Covid-19 and suffering from "persistent brain fog.” In the first essay, "On Being Unapologetically Fucked Up,” the author begins by fuming over a February 2019 incident in which she compared MAGA caps worn by high school kids to KKK hoods. She then runs through a grab bag of flash-point news items (police shootings, border crimes, sexual predators in government), deploying the F-bomb with abandon and concluding, "What I know is that fucked up is as fundamental a state of the world as night and day. But I know there is better. I know that ‘less fucked up’ is a state we can live in.” The second essay, "Believe Women," discusses Milano’s seminal role in the MeToo movement; unfortunately, it is similarly conversational in tone and predictable in content. One of the few truly personal essays, "David," about the author's marriage, refutes the old saw about love meaning never having to say you're sorry, replacing it with "Love means you can suggest a national sex strike and your husband doesn't run away screaming." Milano assumes, perhaps rightly, that her audience is composed of followers and fans; perhaps these readers will know what she is talking about in the seemingly allegorical "By Any Other Name," about her bad experience with a certain rosebush. "Holy shit, giving birth sucked," begins one essay. "Words are weird, right?" begins the next. "Welp, this is going to piss some of you off. Hang in there," opens a screed about cancel culture—though she’s entirely correct that “it’s childish, divisive, conceited, and Trumpian to its core.” By the end, however, Milano's intelligence, compassion, integrity, and endurance somewhat compensate for her lack of literary polish.

The choir is sure to enjoy this impassioned preaching on familiar progressive themes.