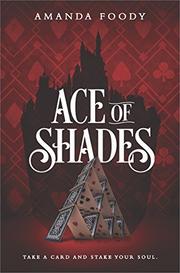 From the Shadow Game series, volume 1

A sheltered girl seeking her missing mother teams up with an ambitious young crime lord in a dangerous gambling city.

Seventeen-year-old Enne Abacus Salta, a proper white girl from conservative Bellamy, arrives in New Reynes clutching a guidebook to the notorious City of Sin. She is in search of her missing adoptive mother, Lourdes Alfero, a white woman known for her genderfluid style of dress. Enne quickly learns that saying her name is a bad idea—Lourdes has been moonlighting for years as a renegade journalist loyal to the Mizer kings who were overthrown and executed during a rebellion 25 years prior. Desperate, she seeks help from the Iron Lord, the bisexual Levi Glaisyer, dark brown–skinned with bronze-and-black curls. He is struggling to pay for a scheme gone bad lest he be sent to participate in the deadly Shadow Game. Complex worldbuilding and large cast introductions initially cause things to drag, but the guidebook serves as an efficient expository device. A positive take on sexuality and sex work is expressed in a nongraphic manner. While the largest plot twist is all too predictable, the relationship between Enne and Levi simmers, and dangers pile up to an exciting climax.

Readers will eagerly wish for a sequel that will allow them to revisit New Reynes.