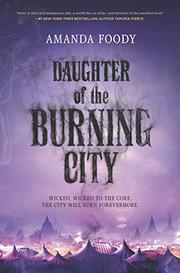 DAUGHTER OF THE BURNING CITY

Ever since her father rescued her from enslavement and adopted her when she was 3, 16-year-old Sorina has lived in Gomorrah, a huge, traveling circus-festival. Born without eyes yet magically able to see, Sorina is in charge of the Gomorrah Festival Freak Show. The attraction is full of Sorina’s illusions, semi-independent creations who have become like family: a scaled grandfather, a boneless acrobatic sister, a flaming baby, and more. But when someone begins to systematically murder her illusions, she begins to question the ways her magic can work. Fiercely loyal and protective, she’ll do whatever it takes to safeguard her family—even if it means working with extremely irritating-but-cute Luca, another Gomorrah jynx-worker. As the duo teams up to solve the murders and prevent more, their connection grows from irritation to friendship to attraction. Luca appears to be demisexual, disinclined to build sexual or romantic relationships without an emotional bond, and the couple has welcome conversations about the speed of their relationship and consent. While many characters are coded as white, it is implied that many of Gomorrah’s residents (including Sorina) are racially diverse. The novel clearly attempts to champion the outsider (and arguably does so successfully with demisexuality), but its disruption of our world’s stigmatization of disability is incomplete—both in its inconsistent questioning of “freak” (though Sorina’s arc is one of empowerment) and in Sorina’s disability-erasing magical sight.

A book that aims high but attempts to cover too much territory.