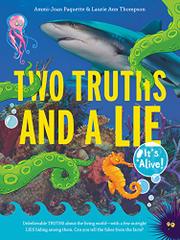 From the Two Truths and a Lie series

With “fake news” now such a prominent topic of conversation, a book that asks readers to separate bizarre but true stories about nature from fake ones is quite timely.

This is the first of a series that presents Ripley’s Believe It or Not–type true stories about the natural world alongside Barnum-esque fabrications and challenges readers to discern the real from the fake. Two out of every three stories are completely true, and one is an outright lie. Some false stories are based on fact, and others are complete imagination. All the stories are accompanied by color photos, maps, and illustrations. Some of the strange but true subjects include fungus-infected zombie ants, book scorpions, and a chicken named Mike that lived for several years after being beheaded. The fabrications include a walking moss that feeds off decomposing animals, the worm-size African threadsnake that lives in the ears of wild dogs and consumes earwax, and the Amazon “megaconda.” Unlike the bogus tree octopuses that supposedly inhabit trees in the Pacific Northwest, most of these invented phenomena are convincing and difficult to separate from the real. It is up to readers to sort out the fakes from the facts. Sound advice is given on how to seek and evaluate information online, and, for the impatient, the fakes are revealed in an appendix.

An engaging, entertaining compendium that will inform and confound.