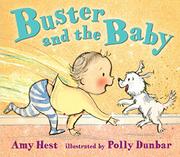 BUSTER AND THE BABY

An energetic toddler plays hide-and-seek with her dog, a small but spunky canine named Buster.

In the course of their play, the fluffy white dog tries to hide under a table, behind a chair, and behind a huge, stuffed toy bear. The unnamed little girl always finds Buster, charging at him with a loud “CHAAA!” that makes Buster’s heart thump. The toddler, who looks about 18 months or so, is full of the typical energy and antics of a child her age, charging through the house, knocking over a vase of flowers, and tossing peas in the air with wild abandon. When the child is finally tucked into bed at night, Buster leaps onto her bed with a “CHAAA!” of his own. In a satisfying conclusion, the dog is cuddled up in the girl’s arms, with their hearts beating together. The little girl’s mother and father are present but don’t have much interaction or control over dog or daughter; the family is white. Digitally composed illustrations have a cheerful charm, with particularly funny expressions on Buster’s face. A few illustrations have several side-by-side images of Buster in motion, which may be interpreted by younger readers as multiple dogs rather than as a progression of just one. The emphasis on heartbeats and the thumping noise of a beating heart are also concepts that may be beyond toddlers’ comprehension.

An amusing tale with heart that preschoolers will enjoy.