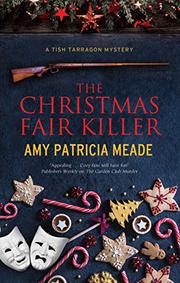 The spirit of Christmas present is marred by murder.

Letitia “Tish” Tarragon, chef and owner of Cookin’ the Books Café in Hobson Glen, Virginia, has been tapped to run a food stand at the local holiday fair. With plenty of help from her usual loyal work crew and weatherman Jules Davis, her old college pal, she’s turning out delectable food and drink. The stars of the fair are the members of the Williamsburg Theater Group, who are performing Twelfth Night and A Christmas Carol on a tight schedule. Tish offers to deliver food to the players, who are all living in trailers nearby, and her sympathetic ear soon has them baring their souls and complaining about Jenny Inkpen, the attractive young addition to the company. Justin Dange added Jenny to the group after he saw her busking in Savannah, but she dumped him for another group member who could promote her career even more effectively. When Tish discovers Jenny shot dead in her trailer, she uses the skills she honed in The Garden Club Murder (2019) to help Sheriff Reade, who’s more than a little in love with her. The confounding discovery that Jenny Inkpen doesn’t exist forces the sheriff to scramble to discover the victim’s real identity while Tish continues to hear more of the secrets that make all the thespians suspects.

A foodie’s delight with lashings of Southern charm, theater lore, and a puzzling mystery.