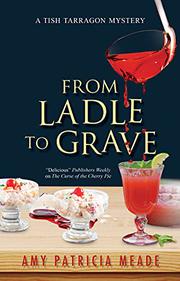 FROM LADLE TO GRAVE

The death of a retired law officer reunites a sleuthing couple.

Tish Tarragon, who owns a literary-themed cafe in Hobson Glen, Virginia, has been quite a successful amateur sleuth. After a hiatus, Sheriff Clemson Reade is back in town, and their attraction to each other heats up when he hires Tish as a consultant in the murder of retired Sheriff Gadsden Carney, whom Tish found dead on the grave of Daisy Honeycutt. Twenty-five years ago, Carney had investigated 6-year-old Daisy’s murder, a sensational case that was eventually closed when her mother confessed to killing her. Now Clemson and Tish realize they must revisit the case because it may provide the motive for Carney’s murder. Carney always thought the mystery hadn't been correctly solved, and since Daisy’s father was a wealthy and powerful senator who whisked his wife and son away before even talking to the police, a coverup seems likely. The senator and his wife, Delilah, were on the outs at the time, and he may have been having an affair with the intern he later married. Delilah was fixated on promoting Daisy’s singing career despite her tender age. The couple’s son, Walker James, was packed off to Europe immediately after Daisy’s murder but is now back in Virginia running a successful software development company. As the sleuths work their way through interviews with everyone who’s still alive, several anomalies turn up that put them on a promising track.

A charming cozy with plenty of suspects for the romantically inclined sleuths to winnow out.