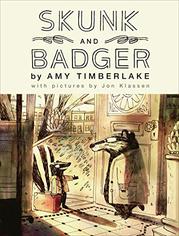 From the Skunk and Badger series, volume 1

Badger’s definitely not ready for his new roommate, Skunk.

The sole resident of his aunt Lula’s brownstone, Badger devotes his days to a life befitting for a rock scientist. Naturally, the semirecluse spends his day in his rock room, where he can do all of his Important Rock Work. Then someone’s knocking politely at the door one day. It’s Badger’s new roommate, Skunk, along with his red suitcase. (If Badger had read those letters from Aunt Lula, he would’ve known….) Skunk swiftly makes himself at home, disrupting Badger’s Important Rock Work in the process. Sure, Badger spends some sweet moments with Skunk, including a discussion of Shakespeare’s Henry V. Skunk even apologizes for the abrupt changes to the living arrangements. Then the chickens arrive, all hens and no roosters (though Skunk does invite Larry), infuriating Badger. When a stoat-shaped menace appears at the door, Badger reacts with little consideration for Skunk or his flock of guests, and Skunk leaves the brownstone after harsh words from Badger. Badger’s left alone and unsure. “It would never work out! But Skunk certainly has his moments,” he ponders. A splendid entry in the odd-couple genre, Timberlake’s spunky series opener posits that compassion and inner transformation can strengthen the unlikeliest of friendships. It’s an approach that gestures toward broader societal conversations (consider the word that prompts Skunk to leave: “vermin”) without losing focus on the story’s delightful central duo. The use of fragmented sentences, repetition, and onomatopoeia makes for a fun read. Klassen’s muted, wistful artwork, meanwhile, invokes sweeping sentiments during key events.