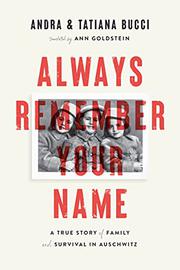 A True Story of Family and Survival in Auschwitz

Two survivors of the Holocaust offer a dual-voiced account of their concentration camp experiences and their lives afterward.

The Bucci sisters spent their early lives in Fiume, an Italian city taken over by Croatia at the end of World War II. In this shared memoir, the authors bear witness to the nine months (April 1944 to January 1945) they spent at Auschwitz. They were 6 and 4 when they were first separated from their family. Their fate was unusual, since most children were killed on arrival. But as translator Goldstein speculates in her note, because they looked almost identical, they may have appealed to Josef Mengele, who experimented on twins. The Buccis attribute their survival in the camp to the unexpected kindness of an otherwise cruel female prison guard who gave them extra food and unexpected gifts. “We don’t know the reason,” write the authors, “but it’s precisely her care for us that later saved our lives.” After liberation, the two were sent for one year to Prague and then to a group home for child Holocaust survivors run by a woman who trained under child psychologist Anna Freud. The woman later found the girls’ parents, both of whom had survived imprisonment but in postwar years had been forced to move to Trieste to retain Italian citizenship. Their mother pushed them to “grow up as Catholics” to protect them from harm, but the girls held fast to Judaism. That decision formed the bedrock of the commitment they developed as older women to forgo forgetfulness of the past and tell their story. Written in the simple, direct language of witness and accompanied throughout by family photographs, this poignant story celebrates human resilience and warns readers living in an increasingly divided and chaotic world to beware the “monsters” created by “the sleep of reason.”