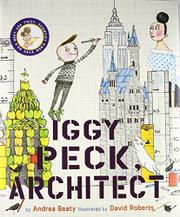 A repressive teacher almost ruins second grade for a prodigy in this amusing, if overwritten, tale. Having shown a fascination with great buildings since constructing a model of the Leaning Tower of Pisa from used diapers at age two, Iggy sinks into boredom after Miss Greer announces, throwing an armload of histories and craft projects into the trash, that architecture will be a taboo subject in her class. Happily, she changes her views when the collapse of a footbridge leaves the picnicking class stranded on an island, whereupon Iggy enlists his mates to build a suspension bridge from string, rulers and fruit roll-ups. Familiar buildings and other structures, made with unusual materials or, on the closing pages, drawn on graph paper, decorate Roberts’s faintly retro cartoon illustrations. They add an audience-broadening element of sophistication—as would Beaty’s decision to cast the text into verse, if it did not result in such lines as “After twelve long days / that passed in a haze / of reading, writing and arithmetic, / Miss Greer took the class / to Blue River Pass / for a hike and an old-fashioned picnic.” Another John Lithgow she is not, nor is Iggy another Remarkable Farkle McBride (2000), but it’s always salutary to see young talent vindicated. (Picture book. 6-8)