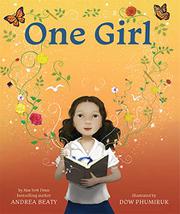 While sitting outside her home one night, a forlorn little girl is surprised by a book that falls from the sky.

Glowing like a shooting star, the book lands at her feet. When she opens it, the pages transport her to a whimsical, imaginary land full of possibility. The girl is so enamored with the book that she takes it to school and shares it with her classmates. Inspired by what she’s read, the girl begins to write her own, original story. Swept up in the magic she has created, the girl’s classmates start reading—and, in one case, writing—books of their own. Eventually the first girl’s words take flight, shimmering as they circle the Earth and land at the homes of other children who, presumably, will be inspired to find their voices. Beaty’s rhyming text is charmingly sparse: each word is carefully chosen, and the language glimmers with precision. Much of the story is told by Phumiruk’s gorgeous illustrations, which not only feature a protagonist who appears to be Asian, but also children with diverse skin tones and hair textures; all the children appear to be wearing school uniforms. While the words and pictures work in synchrony, creating a lyrical call to action encouraging children to find their voices and, simultaneously, their inner strength, the plot itself is abstract and widely open to interpretation, such that the book reads more like a poem than a traditional story. (This book was reviewed digitally with 11-by-18-inch double-page spreads viewed at 60.6% of actual size.)