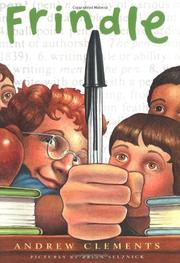 Nicholas is a bright boy who likes to make trouble at school, creatively.

When he decides to torment his fifth-grade English teacher, Mrs. Granger (who is just as smart as he is), by getting everyone in the class to replace the word "pen'' with "frindle,'' he unleashes a series of events that rapidly spins out of control. If there's any justice in the world, Clements (Temple Cat, 1995, etc.) may have something of a classic on his hands. By turns amusing and adroit, this first novel is also utterly satisfying. The chess-like sparring between the gifted Nicholas and his crafty teacher is enthralling, while Mrs. Granger is that rarest of the breed: a teacher the children fear and complain about for the school year, and love and respect forever after.

With comically realistic black-and-white illustrations by Selznick (The Robot King, 1995, etc.), this is a captivating tale—one to press upon children, and one they'll be passing among themselves.