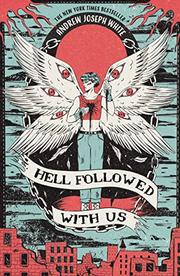 HELL FOLLOWED WITH US

In the aftermath of a plague, a furious transgender boy seeks to end the movement that plans to wield him for their genocide in the name of salvation.

On Judgment Day, the Angels, a cult of White, Evangelical Christian eco-fascists, released the Flood upon the world—a plague to purge the unfaithful—but their work remains unfinished until they unleash their final weapon. Benji, a White trans boy, couldn’t escape the Angels before they injected him with Seraph, a plague mutation engineered to transform him into an abomination in control of the Flood and all its monstrous creations. However, when he’s ambushed by nonbelievers who present him with an opportunity, Benji joins forces with their resistance, determined to fight the Angels with whatever time he has left. This cinematically gory apocalyptic horror not only delivers high stakes, fast-paced action, and fraught romantic drama, it engages critically with the intertwining impacts of colonialism, capitalism, and White supremacy. The resistance truthfully depicts diversity within queerness while also holding White queer people accountable for gatekeeping and upholding White supremacy. The narrative focuses primarily on Benji’s point of view but shifts strategically with shorter sections showing the perspectives of his two romantic interests, including Nick, a White, cisgender autistic boy who plays a significant role in the resistance. A restorative, hopeful resolution brings the story to a satisfying close without turning Benji into a savior.

A gloriously ferocious and scorching blaze.