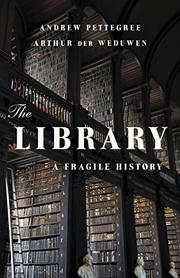 A comprehensive history of the invention and reinvention of libraries.

Historians Pettegree and der Weduwen have created a capacious, deeply researched examination of collections of the written word. They begin with clay tablets in the Assyrian Empire of Mesopotamia and move to the digitized material probed by Google’s Alexa (named after the ancient library at Alexandria) to answer 500 million questions per day from customers around the world. The history of the library, the authors assert, “is not a story of relentless progress” or even of shared meaning about what a library should be, what it should contain, and whom it should serve. From ancient Greece to contemporary urban spaces, the authors offer a panoramic view of collections ranging from illuminated manuscripts in medieval monasteries to popular novels circulated in bookmobiles, from Oxford’s privately funded Bodleian Library to Andrew Carnegie’s extensive public library system. Collections often served as symbols of status and power; access to the San Marco library in 15th-century Florence, for example, “was restricted to literate male citizens of the city with scholarly interests.” Once the printing press made books affordable—9 million books were printed by 1500—appetite for ownership burgeoned, “fueled by universities and schools, movements of popular lay devotion and the steady growth of cities.” Still, before the 17th century, most libraries were privately held, occupying “spaces which were not originally constructed as rooms for books.” In a narrative packed with fascinating facts for bibliophiles, the authors recount the vulnerability of books to war, oppression, censorship, fire, and confiscation. Even collectors used to rid themselves of duplicates by recycling them “as wallpaper, bookbinding supports, wrapping paper or toilet paper.” Not until the advent of antiquarian booksellers was there an eruption of “bibliomania, frantic competitive bidding for the best and rarest copies of early printed books.” Faced with increasing digitization, libraries are more than merely public gathering spaces. “The health of the library,” write the authors, “will remain connected to the health of the book.”