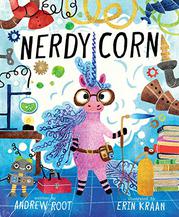 She’d rather tinker with robots in her laboratory than “[splash] majestically” in waterfalls, and she prefers chemistry to glitter (as if chemistry can’t include glitter!). Where other unicorns are adorned with hearts, stars, and flowers, Fern sports dots, stripes, and a tool belt, though the distinction can be hard to discern in pastel-dominated art that makes everyone look charmingly twee. Of course, other unicorns make fun of Fern’s bespectacled nerdiness and exclude her from their Sparkle Dance Parties. So she decides never to help them again, in a fabulously grumpy double-page close-up: “The next time they need an engine rebuilt, turbo-sprocket installed, or hydrothermal capacitor welded, they are on their own.” The text seems to be going for as many technical-sounding words with as little meaning as possible—though the illustrations do properly depict several tools, including a truing stand, a multimeter, and calipers. As it turns out, the Sparkle Dance Parties depend on technology, and Fern’s the only one who can fix the “starlight bedazzler,” so the rude unicorns return to beg. At first Fern doesn’t bother, but she eventually concludes that “being smart, a good friend, and always willing to help others [is] far more important than holding on to a grudge.” Once she saves the dance, the other unicorns clamor to celebrate her skills; those hoping for a wise take on uniqueness should look elsewhere. (This book was reviewed digitally with 11-by-18-inch double-page spreads viewed at 62% of actual size.)