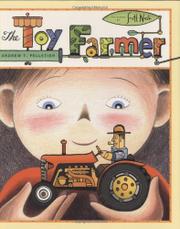 When Jed discovers an old toy of his father’s in the attic, it catapults him into a fabulous agrarian fantasy. “Let’s just say that was some farmer,” says his father with a wink, and so he is. Corn cob pipe clenched cheerfully in his teeth, the farmer sits in his tractor, seeming at first like any old tin toy. But when Jed wakes up the next morning, he finds that his green rug has been tilled into an orderly field, out of which, days later, sprouts a remarkable pumpkin. Pelletier gives readers a beguiling concept, allowing the lines between reality and fantasy to blur pleasingly. It’s but a simple step from Jed’s singing “Blue Moon of Kentucky” along with his toy to entering his humongous pumpkin in a fantastic toy county fair. Nash’s illustrations beautifully facilitate the reader’s acceptance of the premise, rendering Jed’s “reality” in soft pastels and the toy farmer and his world in sharp-edged cartoons. It’s a gentle homage to the power of a child’s imagination, where the fantasy world created in play always seems more solid than plain old reality. (Picture book. 4-8)