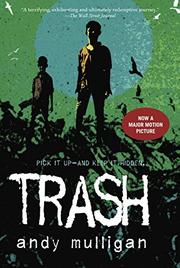 In an unnamed country (a thinly veiled Philippines), three teenage boys pick trash for a meager living. A bag of cash in the trash might be—well, not their ticket out of poverty but at least a minor windfall. With 1,100 pesos, maybe they can eat chicken occasionally, instead of just rice. Gardo and Raphael are determined not to give any of it to the police who've been sniffing around, so they enlist their friend Rat. In alternating and tightly paced points of view, supplemented by occasional other voices, the boys relate the intrigue in which they're quickly enmeshed. A murdered houseboy, an orphaned girl, a treasure map, a secret code, corrupt politicians and 10,000,000 missing dollars: It all adds up to a cracker of a thriller. Sadly, the setting relies on Third World poverty tourism for its flavor, as if this otherwise enjoyable caper were being told by Olivia, the story's British charity worker who muses with vacuous sentimentality on the children that "break your heart" and "change your life." Nevertheless, a zippy and classic briefcase-full-of-money thrill ride. (Thriller. 12-14)