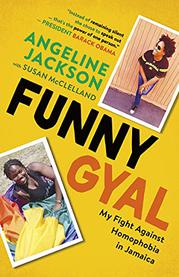 My Fight Against Homophobia in Jamaica

by Angeline Jackson with Susan McClelland

An LGBTQ+ activist chronicles her experiences growing up in Jamaica, where same-sex activity is criminalized.

The summer Jackson got her period, she wondered, “why couldn’t I like girls and also love God?” From her spiritual and sexual awakenings as a Christian schoolgirl to being recognized for her courage and global activism by President Barack Obama during a state visit to Jamaica, Jackson traces the painful path of her fight against homophobia and rape culture in her native country. Despite being forced into conversion therapy by her conservative parents, a teenage Jackson came to embrace both her sexuality and her faith, though her relationship to the church as an institution remained complicated. After enduring “corrective rape” (a crime in which the perpetrators claim to “fix” the gay person through assault), Jackson navigated a less-than-sympathetic legal system to pursue justice. Her story is one of tragedy and heartbreak but also of curiosity, first love, and longing. She emerges from these traumatic experiences as a fierce advocate for queer youth and a riveting, deeply reflective storyteller. Readers with similar struggles will find encouragement and comfort in these pages. Of concern, however, is Jackson’s uncritical recounting of a sexual relationship she describes as an “affair” with her 32-year-old tutor, Miss Campbell, when she was 17.