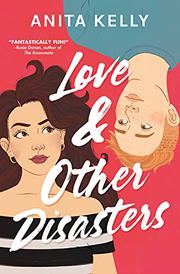 On the set of a popular cooking competition show, two contestants attempt to conquer challenges of the heart as well as the kitchen.

Dahlia Woodson doesn't know what she wants in life; she's been feeling aimless since she got divorced, not just personally, but professionally too. Entering Chef's Special, a competition for amateur chefs, is basically a last-ditch attempt to revamp herself, but she gets off to a shaky start by literally walking into one of her fellow contestants on the first day of filming. Dahlia is really the last thing on London Parker's mind, though. As the first out nonbinary contestant on the show, they've got enough pressure on their shoulders, not to mention online trolls. It's easier to shut out the internet once the cameras are rolling and London finds themself distracted by Dahlia's seemingly limitless energy and her never-ending waves of black hair. As time passes and both Dahlia and London continue to make it through each week of competition, the stakes keep getting higher on Chef's Special—but it's also the perfect backdrop for the two of them to start falling in love. Dahlia's exuberance serves as the perfect complement to London's initially taciturn demeanor, and the story is a consummate case of opposites who do more than just attract: They bring out the best in each other. Kelly's novel illustrates the truth that love calls for vulnerability from both parties—not merely in expressing honest feelings, but in accepting the other person for exactly who they are without limits. Kelly will whet your appetite from the first page, capping off the wonderful feast with the absolute sweetest of happy-ever-afters.