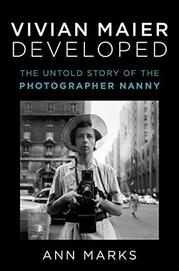 The Untold Story of the Photographer Nanny

When Maier died, only two people, John Maloof and Jeffrey Goldstein, knew of the massive collection of brilliant photos she had left behind. The two had stumbled upon her work at a foreclosure auction in Chicago but had little information about her except that she had been a nanny. Marks entered the scene five years later after watching a documentary about the mysterious Maier and immediately “felt compelled to unravel the story that had confounded so many.” Drawing on her skills as an amateur genealogist, the author reconstructed Maier’s family tree through archival research and then used the mostly unannotated photographs in Maier's collection to piece together her life and to track down and interview the individuals who knew her. The result is a meticulously documented narrative replete with images born of Maier’s 40-year love affair with photography. Marks traces her life from her birth in New York to rural France, where she spent her childhood. In 1938, she returned to New York, a city “she barely knew.” In telling the story, Marks argues that, contrary to what her employers believed, Maier actually did have ambitions “to launch a professional career.” But her sometimes “unwelcoming demeanor and uncompromising nature”—products, Marks speculates, of a dysfunctional family past—and her lack of “credentials [and] connections” likely sabotaged her efforts. While she found temporary happiness as a nanny to the boys who later spread her ashes, her later life was dominated by the hoarding the author believes developed as a result of an emotionally deprived early life and the many displacements she experienced. Compelling and richly detailed, this book sheds new and important light on an intriguing photographer and her singular life.

A well-researched and incisive biography of an artist who should be better known.