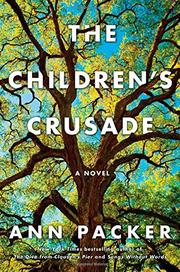 A young doctor buys a piece of land in a place that will later be known as Silicon Valley, building a house that will shape his family for decades.

Packer (Swim Back to Me, 2011, etc.) is an expert at complicated relationships; she likes to show more than two sides to every story. Who's responsible for the fracturing of the Blair family? The obvious answer is Penny, a woman oppressed by domesticity, who retreats from her husband and four children to spend all her time in the shed—she calls it her studio—where she works on collages and mugs made of too-thick pottery, eventually even sleeping there. Or could her husband, Bill, a pediatrician with endless patience and empathy for kids, have pushed his wife away? Perhaps it was James, the youngest (and unplanned) child, a holy terror from the day he was born, who tipped his family over the edge. In beautifully precise prose, Packer tells the Blairs’ story, alternating chapters between the past, when the children were young, and the present, four years after their father’s death, when they each get a chance to tell their own stories in the first person. While James has bounced around the world, his siblings—Robert, a doctor; Rebecca, a psychiatrist; and Ryan, a teacher—all live near their childhood home, which James wants to sell. Emotions have never had so many shadings as in Packer’s fiction; she can tease apart every degree of ambivalence in her characters, multiplying that exponentially when everyone has different desires and they all worry about finding fulfillment while also caring for each other—except, perhaps, Penny. But though we rarely see Penny’s perspective on why she withdrew from her family, we can fill in the blanks; it’s the 1960s and ’70s, a time when women were searching for a larger role in the world. Packer seems to set Penny up as the villain, but even that view becomes complicated by the end.

When you read Packer, you’ll know you’re in the hands of a writer who knows what she’s doing. A marvelously absorbing novel.