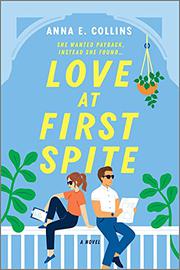 An interior designer builds a “spite house” to get revenge on her cheating ex…but falls for the grumpy architect who’s helping her design it.

Dani Porter’s happily-ever-after imploded when she found out her fiance, Sam, cheated on her a month before their wedding—with their realtor. Dani can’t seem to move on until she realizes that the lot next to Sam's house—her former home—is still for sale. With the help of her BFF/cousin, Mia, and her new landlady, Iris, she pulls together enough money to buy the lot and start construction on the Spite House, an Airbnb that will block Sam’s view and remind him of her every time he looks out the window. The only problem is that Dani barely has enough money to cover the build, and she needs to find an architect on the cheap. Enter Wyatt Montego, a gruff architect at her firm who strikes fear into the hearts of their co-workers and has even been known to make them cry. As they get to know each other, Dani realizes that Wyatt’s standoffish personality is hiding his vulnerability—but will he ever open himself up to her? And can Dani ever give up on her revenge scheme and let go of the past so she can have a future with Wyatt? Dani and Wyatt have loads of chemistry, and Collins ratchets up the sexual tension as they get to know each other, although the story loses some steam in the middle when they hit numerous roadblocks that are largely created by a lack of communication. Still, they’re an engaging couple, and the side characters are entertaining (particularly Iris, a delightfully eccentric widow who supports Dani with humor and wisdom). Dani’s struggles to get over her ex are believable, and Wyatt is the perfect grumpy romance hero with a heart of gold.

An enemies-to-friends-to-lovers story that’s sure to delight rom-com fans.