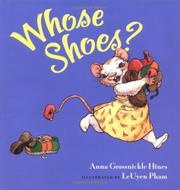 With exuberant rhymes and clever illustrations, this lively guessing game taps into children’s love of shoes and dress-up play. Bouncy verses describe the various types of shoes a little girl wears and onomatopoetic verses and the accompanying illustrations provide readers with clues for the correct answers. Hines’s (Pieces, 2001, etc.) verses beg to be read with a suitable theatrical flourish for maximum effect: “When I wear these / clappy high-heeled shoes, / tippy shoes, slippy shoes . . . / I go / clop, clip, clap!” Readers can lift the flap of the gatefolds to reveal the answer to the title’s question. From father’s “clompy” footwear to the baby’s booties, everyone’s shoes are put on for a twirl, until the narrator finds the “snappy just-right shoes” that are her own. The pen-and-ink watercolors have a winsome, old-fashioned feel to them. The protagonist is an impish young female mouse who irreverently invades her brother’s box of comic books clearly marked “Don’t Touch” and happily dresses up as mom and dad. Wonderfully wry touches fill the illustrations with humor: father’s tie has a Swiss cheese motif, a spool with two needles and some intertwined thread forms the family-room chair, brother’s bed is (what else?) an old box for matches with match-stick posts, and more. A merry read-aloud romp. (Picture book. 2-5)