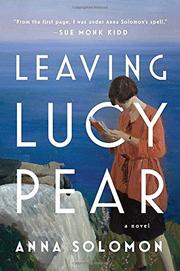 The abandonment of a newborn child in a pear orchard opens an intense tale of choices and consequences which, despite its early-20th-century setting, has the capacious feel of a Victorian novel.

Set on Cape Ann, Massachusetts, in the 1910s and '20s, Solomon's (The Little Bride, 2011) penetrating second work of fiction connects Irish and Jewish, workers and bluebloods, the fertile and the barren. Events spring from an abrupt sexual act that leaves wealthy, musical, Jewish Bea Haven pregnant. Sent to live with relatives in the country until the baby is born and she can take up her place at Radcliffe, 18-year-old Bea is repelled at the chilly prospect of placing her child in an orphanage and instead leaves the girl in the path of Irish trespassers who annually strip her uncle’s fruit trees. So the baby—in future known as Lucy Pear—is spirited away by Emma Murphy to join her brood of nine children. Solomon returns repeatedly to Bea’s fragile psychology in the ensuing decade: her breakdown, her withdrawal, her failing marriage to handsome, gay Albert Cohn, her sadness for “all the lives that might have been hers.” Meanwhile, Lucy grows up visibly different from her adoptive family, while Emma begins an affair with a local businessman and finds herself working, briefly, for Bea, whom she recognizes as Lucy’s mother. As background, Solomon introduces Prohibition and the Sacco and Vanzetti case, yet the novel seems to belong to an earlier era of storytelling, focused on the inner lives and challenges of a community, especially the womenfolk. Repeatedly opting for the less predictable outcome, Solomon reaches resolutions marked with the same reflective maturity as the rest of this solidly absorbing novel.