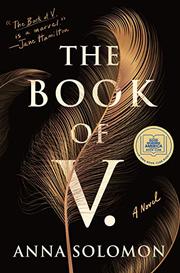 THE BOOK OF V.

Esther, the Old Testament teenager who reluctantly married a Persian king and saved her people, is connected across the ages to two more contemporary women in a sinuous, thoughtful braid of women’s unceasing struggles for liberty and identity.

Biblical Esther, second-wave feminist Vee, and contemporary mother-of-two Lily are the women whose narrative strands and differing yet sometimes parallel dilemmas are interwoven in Solomon’s (Leaving Lucy Pear, 2016, etc.) questing, unpredictable new novel. All three are grappling—some more dangerously than others—with aspects of male power versus their own self-determination. Esther, selected from 40 virgins to be the second queen—after her predecessor, Vashti, was banished (or worse)—is the strangest. Her magical powers can bring on a shocking physical transformation or reanimate a skeletal bird, yet she is still a prisoner in a gilded cage, mother to an heir, frustrated daughter of an imperiled tribe. Vee, wife of an ambitious senator in 1970s Washington, finds herself a player in a House of Cards–type scenario, pressured toward sexual humiliation by her unscrupulous husband. Lily, in 21st-century Brooklyn, has chosen motherhood over work and is fretting about the costumes for her two daughters to wear at the Purim carnival honoring Esther. Alongside questions of male dominance, issues of sexuality arise often, as do female communities, from Esther’s slave sisters to Vee’s consciousness-raising groups to Lily’s sewing circle. And while layers of overlap continue among the three women's stories—second wives, sewing, humming—so do subtly different individual choices. Finely written and often vividly imagined, this is a cerebral, interior novel devoted to the notion of womanhood as a composite construction made up of myriad stories and influences.