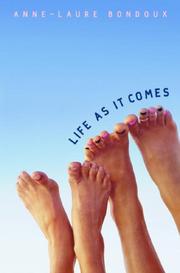 LIFE AS IT COMES

Like most 15-year-olds, Mado is stressed about exams, but unlike her peers, Mado knows that poor grades will signal to the family-court judge that her 20-year-old sister and only living relative isn’t capable of caring for her. Determined to stay together in the wake of their parents’ tragic death, these Parisian sisters try to cope with their glaring differences. Despite Patty’s meager parenting skills, it’s apparent that Mado is her own guardian. This role reversal is most clear when Patty reveals that she’s several months pregnant and without plans for the child, forcing Mado to assume responsibilities she’d never dreamed possible and, most importantly, to learn to take life as it comes. Originally written in French, this text translates seamlessly as the sisters’ raw emotions, which range from painfully overwhelmed to ecstatically in love, are understandable in any language. Although Mado’s pragmatic voice dominates, both characters are well-developed and easily visualized. Sincere and believable. (Fiction. YA)